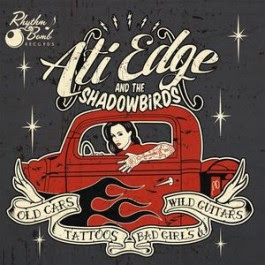 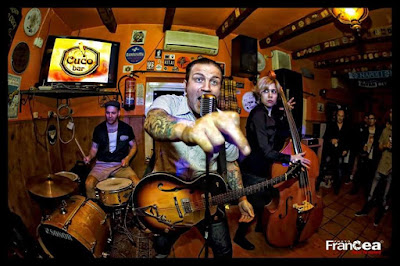 In 2007 Ati Edge of The Silver Shine  hatched the side project call Ati Edge and The Shadowbirds  and it's still going strong today.Basically this is his billy band or as some say Silver Shine 2 and it's a damn good one   Hell over the years the outfit has developed a solid rep and in some corners, considered the better band  of the two. So far they have released one  album and a couple of eps,(all worth checking out) with the last ep  released in 2013.Now in 2015 the band's long awaited sophomore album is out and "Old Cars, Tattoos, Bad Girls and Wild Guitars" is  pretty stout. This puppy checks in with 11 tracks of rockabilly/ rock n roll  that has some muscle and also is damn catchy. At times this comes off like dirty ,garage rock n roll  but it  really doesn't stray far  from it's rockabilly base and that's a good thing.Highlights include : " Baddest Girl In Town","Kustom Kulture Baby", "Old School Inks" and "Old Cars, Tattoos, Bad Girls And Wild Guitars"
The album's title "Old Cars, Tattoos, Bad Girls and Wild Guitars" really tells you straight up what your getting here and it's also their best release to date.This is one disc that delivers and one that  is full of kool rockabilly /rock n roll that will grow on you. Recommended!  https://www.facebook.com/atiedgeandtheshadowbirds/timeline   http://atiedge.com/  https://www.reverbnation.com/atiedgeandtheshadowbirds
Posted by Slams Reviews 2 at 14:52