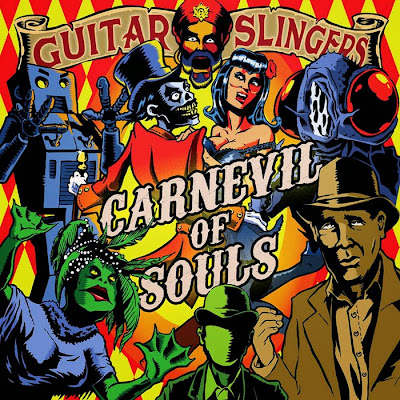 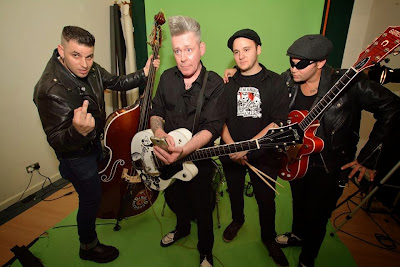 The Guitar Slingers are without a doubt one of the best bands out there .Want proof just check out any of their 3 albums.  What started out in 2007 as basically a one man project by  Doyley (the main man of Diablo Records) has now become a truly killer band that has few equals.That said the band has now dropped their latest effort,"Carnevil Of Souls"  on a still unsuspecting public and this time their taking no prisoners.We get 11 originals tracks that deliver one hell of a knock out punch.This is rockin' psychobilly that at times is infused with  spaghetti ,rockabilly and surf. From a circus sideshow opening to a  full throttle assault "Carnevil Of Souls" covers a lot of ground and does it well.Highlights include "The Fly With The X Ray Eyes","Outerspace Out Of Time", "The Invaders" and "The Hitcher".
You don't have to be a fan of psychobilly to like "Carnevil Of Souls", it's much more than that.This is one really impressive rock n roll album and if you say you like rock n roll and don't like this; your a flat out liar.Easily one of the best albums to come out in a while by a band you should be very aware of .Highly Recommended!!!   https://www.facebook.com/guitarslingers?fref=ts
https://www.facebook.com/groups/253948874790519/
http://www.reverbnation.com/guitarslingers
Posted by Slams Reviews 2 at 13:06