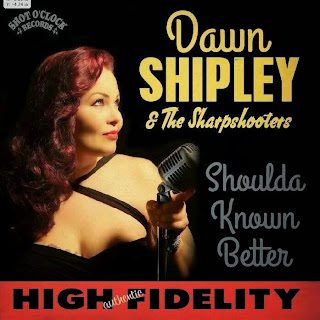 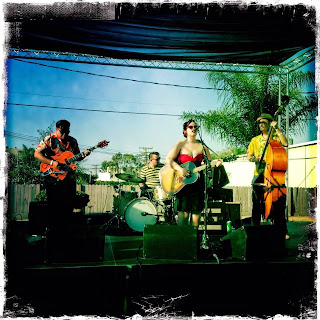 Dawn Shipley & the Sharp Shooters have earned they're fair share of kudos over years .This is one band that's all about the music period. Playing rockabilly to honky-tonk and hillbilly  to 50's rock n roll and more they have developed a pretty fair size and loyal fan base.With only 2 albums out (the last one came out in 2006) and a few singles, with last years jazzy and kool "Voodoo You" been the latest, fans have had to endure long waits .Well now the wait is over for the outfit's 3rd album,"Shoulda Known Better"and it's one very solid album.Clocking in with 11 tracks of mainly rockabilly that at times isn't afraid to drift a little  into country,honky tonk, western swing and jazz.Highlights include:" Little Too Late","Voodoo You", "
Don't Want Your Lies" and "Shoulda Known Better"
Dawn Shipley & the Sharp Shooters  have delivered a pretty good sounding rockabilly  album that benefits from strong song writing and execution. Shoulda Known Better  is diverse ,fresh, sounds authentic and is very likeable.Recommended !     http://www.dawnshipley.com/  https://www.facebook.com/dawn.shipley.andthe.sharp.shooters  http://www.reverbnation.com/dawnshipleyandthesharpshooters
Posted by Slams Reviews 2 at 15:22