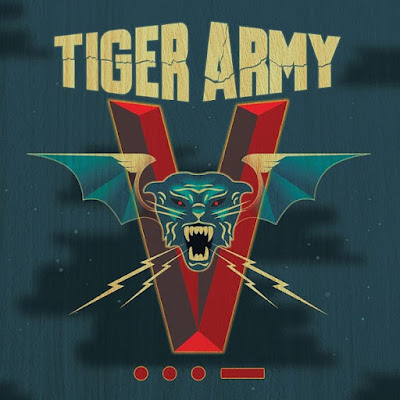 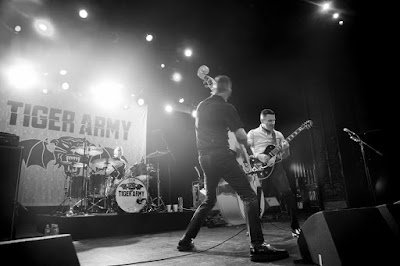 Love them or hate them,Tiger Army have always been an important psychobilly band.Once a unifying force  in the psychobilly scene, they became a polarizing one with the 2007 release of "Music From Regions Beyond". By changing up the band's musical sound and direction they lost a whack of their old fans and gained their wrath but at the same time grew  a bigger fan base.I say all this because I personally have never been a fan but do prefer their first couple of albums,so you know were this review comes from. That said the band's new album  "V" has been 9 years in the making and probably won't change the way most view the band.This puppy comes in with a prelude and 12 tracks  that  make for an interesting mix bag.We do get a little psychobilly ,some country ,shades of punk and at times an early/ mid  60's rock n roll vibe. The album starts off hard and fast  but don't let that fool you.It's almost like Nick 13(the only original member) is giving into the old fan base.From there the album with the exception of  a couple of tracks  could be a  Nick 13  solo album .Highlights are "Devil Lurks On The Road ","Prelude Ad Victoriam", "Firefall" and the catchy " Prisoner Of The Night"

All said and done "V" will probably be  Tiger Army's most successful album so far but it's also their most mainstream effort .It has a few moments  and let's just leave it there. 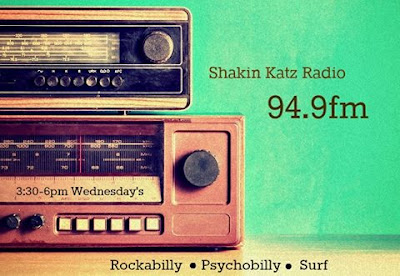 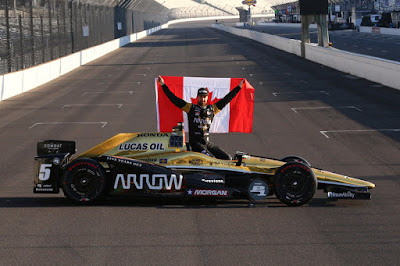 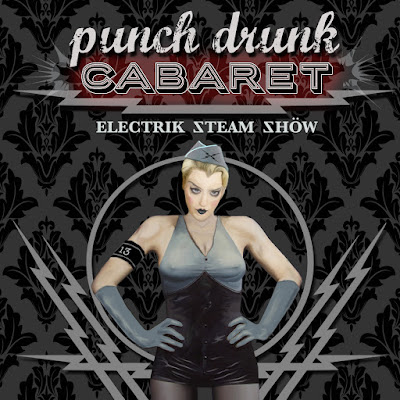 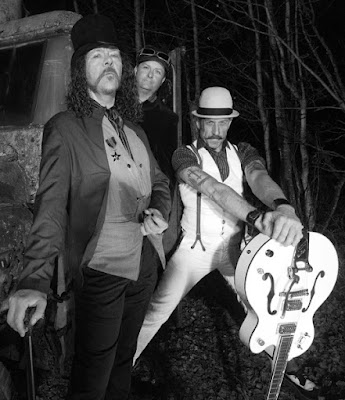 The voice comes on and says "tickets please,enjoy the show" and you just know all is good because  Punch Drunk Cabaret are about to step up. Hell the kings of "Steampunk swing " always deliver and aren't afraid to throw a few surprises at you along the way.The band is now back with it's 3rd album "Electrik Steam Show" and this time out they really flex their muscles.Sure it's a bit eclectic and we  get the mix bag of roots, rockabilly and steampunk but it's surprisingly ramped up here.This is easily PDC most rockin' and hardest album yet.We get 10 tracks and an intro that really bare that out and it's a pretty diverse too boot.Highlights include: "Halos and Horns", "Meat on the Bones", " Hell Etc", "Voodoo Vodka Stomp" and "Detonation Time"
Punch Drunk Cabaret continue to make kool and diverse rock n roll. With "Electrik Steam Show" they back that up.This may not be for everyone but when given a chance it will win you over,it's that good .Yes it's a killer rock n roll album and PDC still can't be put into a box.You have to like that. Recommended!!!
https://www.facebook.com/PunchDrunkCabaret/timeline
http://www.punchdrunkcabaret.com/ 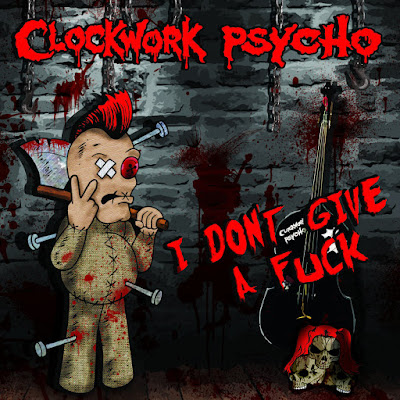 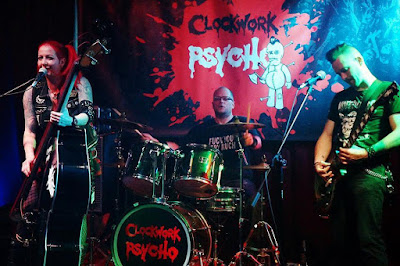 Clockwork Psycho are one outfit that's up to the challenge.After releasing a stellar debut album  "Nightmares From Laibach" back in 2014 the band found themselves in big demand. The amount of press (all good)  and airplay they received  was and is kinda rare for a psychobilly band. These kats then went out ,worked harder and then got signed to Diablo Records .The results are now out for all to hear with "I Don't Give A Fuck"    and there's no  sophomore  jinx here.This is one impressive  raging slab of psychobilly /punkabilly that comes in with 12 tracks that don't let up.We get more psychobilly and less punk this time out. Right from the get go this puppy steps up and grabs your attention.Highlights include: " Library Of Abandoned Hope", "Go Away !", " Corpse That Stayed" , "Dead Boy" and "Clockwork Psycho"

Overall this is a stronger and  better sounding album than their debut.One reason for this is that Doley (Guitar Slingers,Diablo Records) did the production. However Clockwork Psycho is simply a better band now.This is one tough, hungry and damn good band that has a kool edginess about them.Best keep an eye on these kats. Highly recommended!!      https://www.facebook.com/clockworkpsychoband/timeline   https://www.reverbnation.com/clockworkpsycho
Posted by Slams Reviews 2 at 09:43 No comments: 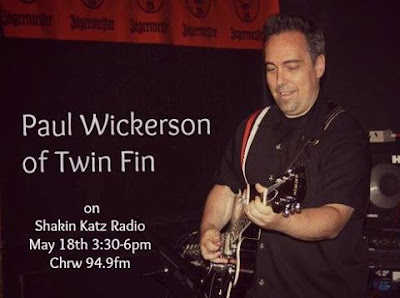 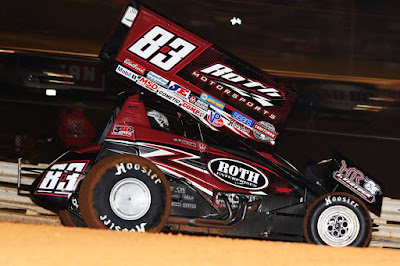 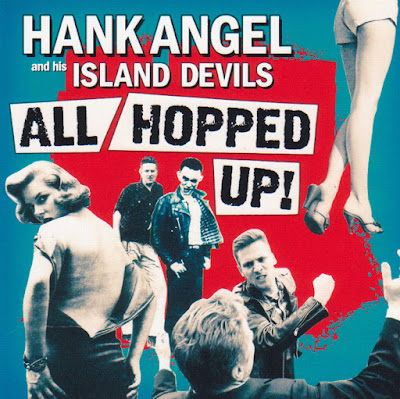 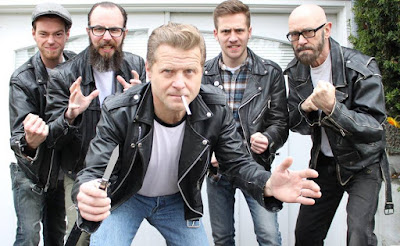 When  Hank Angel and His Island Devils release a new disc your guaranteed a couple of things: it's going to be good  and a blast of  fun. After all this is a pretty talented outfit that doesn't take itself too seriously and that's a good thing.As a result their brand of rockabilly/rocknroll  is infectious and kinda kool .That said the band's latest release  "All Hopped Up !" is a straight out winner.Clocking in with 14 tracks that rock, bop ,strut and nail it. We get mix of rockabilly and rock n roll with "junky blues" thrown' into the pot for an added punch. Also like in the past we get some kool harp and sax action  that up the ante.Highlights include: "Honey Don’t Cool Off ", " Crash The Hop", "All Hopped Up", "Roadmen" and "Rockabilly Til I Die".

From a couple of slower numbers too all out rockers "All Hopped Up ! " is a total blast.This is one of those albums you can't help but like.It hooks you in and then delivers more than you expect.Hell it leaves you wanting more.Highly Recommended !!
https://www.facebook.com/hankangel/?fref=ts     http://hankangel.com/
Posted by Slams Reviews 2 at 09:29 No comments: 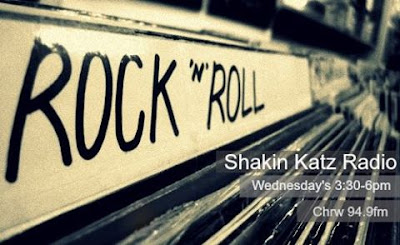 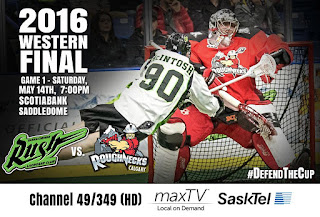 The Hillbilly Moon Explosion – With Monsters and Gods 2016 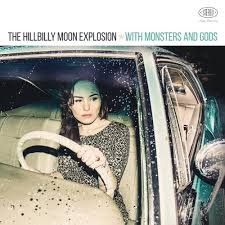 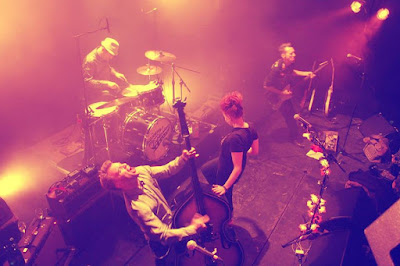 You got to give it to The Hillbilly Moon Explosion,this veteran Swiss outfit has always blazed their own path.Sure they have whack of swagger but their koolness and sophistication  is backed up by an equal  amount of talent.This is a "billy" band  that has an impressive ability to change from one genre to another and that  separates them from the rest of the pack.Each release is a mix bag of goodies and their latest effort, "With Monsters and Gods" continues the trend.This puppy struts in with 14 tracks that are fresh ,diverse and pretty much what one would expect.However this time out they ratchet up the rock n roll/rockabilly,hell this is their most rockin' album yet.From straight out rockers to slow burners and the usual jumping over into other genres make this is one very  kool and satisfying ride.Highlights include: " Heartbreak Boogie", "Depression", "Temptation", the previously released "Call Me" and "Down On Your Knees".
To some The Hillbilly Moon Explosion  are a hard group to get into and this album "With Monsters and Gods" should change that.This is easily their  best and most accessible release to date. Recommended!!
https://www.facebook.com/hillbillymoonexplosion    http://www.hillbillymoon.com/
Posted by Slams Reviews 2 at 18:57 No comments: 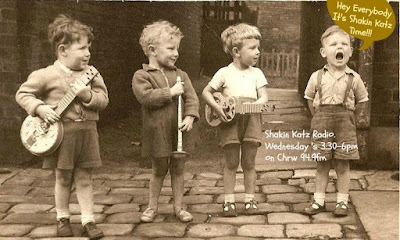 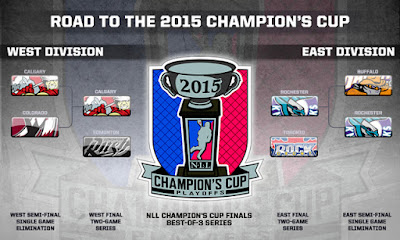