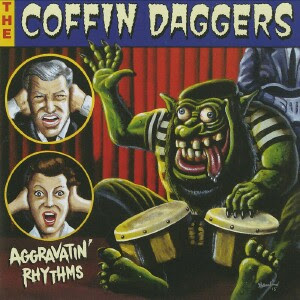 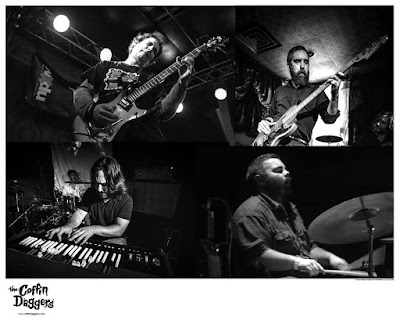 The Coffin Daggers  may not have a big discography for a band that's been around since 1999.Hell they have released a couple of singles ,an ep and only 2 albums, the last been in 2011. However each release has  been pretty impressive.This is one surf punk outfit that knows how too do some serious damage and as a result there is a large, loyal and growing  fan base for these kats.In 2015 the band hitched up with Cleopatra Records and the results are now out  with their third album " Aggravatin’ Rhythms". This  mad puppy comes out swinging  hard, fast and most of all delivers on all accounts.We get 14 tracks (a mix of originals  and  covers) of instrumental surf punk that range from garagy  to smash mouth .This is a powerful brew that's stirred with hard driving guitar and a damn kool organ. Highlights include:  "Instigator", "Five-Five", " The Thing" , and " Wake Up Screaming".
There was some buzz surrounding the release of  "Aggravatin’ Rhythms' "and that was good to see. This is one very strong and intense album but it's a fun ride to boot .Yeah it kicks butt and that's what you would expect.  Highly Recommended!!!     https://www.facebook.com/coffindagger/timeline    http://coffindaggers.com/
Posted by Slams Reviews 2 at 14:11