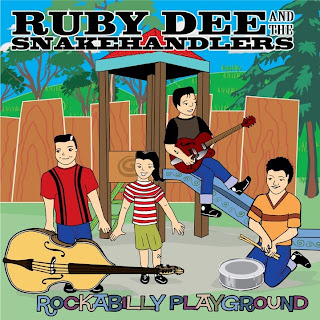 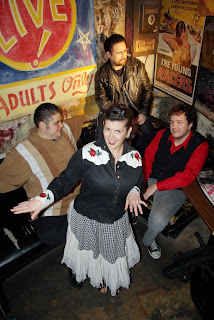 Texas  rockabilly roots rockers Ruby Dee and The Snakehandlers are a band that really does have a ton of cred. For over 10 years now they have been  playing their brand of Americana and rockabilly and in the process have developed a pretty significant following.With 3 albums and an ep out as well as some chart success in the U.S.you could say things are going smooth. In late 2012 the band announced their 4th album by using a Kickstarter campaign  and that the new album would be a children's rockabilly album .Talk about catching people off guard.Well the results are in  and " Rockabilly Playground",the bands fourth album just may surprise you.Sure it's a kid's album but it's also a pretty good rockabilly.Put it this way; lyrics for the kids ( good ones at that) and music for the rest of us.We get 10 tracks here that make for an enjoyable listen ranging from straight up rockabilly to flashes of country.Highlights include:" No Rules","Naptime Is No Fun","