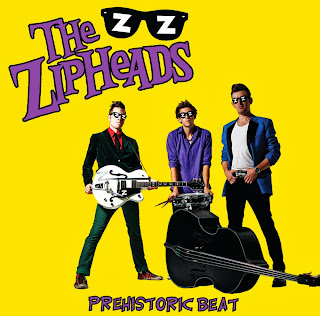 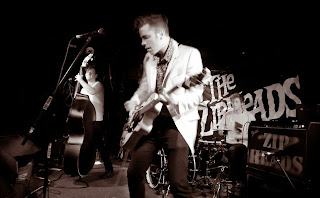 The Zipheads have been kicking around England in one form or another since 2004.For about 4 years the band was called "The Runaway Boys" (not to be confused with the Irish rockabilly band of the same name) and actually achieved some success as well as a earning a rep of been a pretty good live act.In 2008 the band  kinda disappeared only to resurface in 2010 ,this time under their original name The Zipheads.So now in 2013 the band has finally released their long awaited debut album "Prehistoric Beat" .This puppy comes in with a mix of 12 kool tracks of "Suburban Rockabilly" that hit the mark.This is more than just rockabilly we get  ska, punk,psychobilly,shades of surf and even some country all throwin' into the mix.The result is one damn good and interesting album  .Highlights include: " Dinosaur Rock", "Blast From The Past","Back To The Barracks" and "Don't Pretend".
There is really something for everyone here and from the first  track to the last The Zipheads deliver the goods but then again anyone familiar with the band would expect nothing less.Recommended!   https://www.facebook.com/zipheads   http://www.zipheads.com/
Posted by Slams Reviews 2 at 09:21