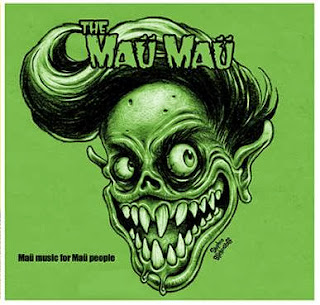 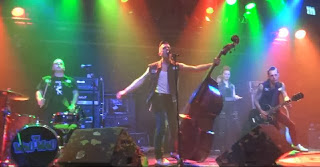 Talk about burning fast and bright in late 2012  The Maü-Maü  erupted onto the Quebec scene like an out of control lead sled rocket  and word of the band spread pretty fast .With a ton of pedigree comes high expectations  and here was a  band that more than  lived up to all the noise that has been surrounding them.In early 2013 they went into the studio to lay down their debut album,played a few killer shows ,took the summer off, packed it in  and then put out their one and only album.That said "Maü Music For Maü People" is nothing short of a pure rush.This puppy smashes in with 15 in your face tracks that for the most part don't let up .Self described as "Psycho- voodoo-garage-a-billy-deluxe" this is all that and more.Let's just say this is raw garage melding with psychobilly that makes for a rough but kool  brew.Highlights include : "Three Men One Coffin", "Red Headed Plag","Sous Les Tropiq" and "Maü Baker".
It's sad that The Maü-Maü are no longer and they really were a band that managed to impress more than a few people . "Maü Music For Maü People " is nothing short of a damn fine album  and a pretty good testament to a short lived kool band that knew how to blow the doors off the joint.
https://www.facebook.com/OowMauMau     the band has posted the album here for free http://www.mediafire.com/download/h39cflnirui4343/THE+MA%C3%9C-MA%C3%9C+-+Ma%C3%BC+Music+For+Ma%C3%BC+People+%282013%29.rar                            http://www.reverbnation.com/themaumau
Posted by Slams Reviews 2 at 11:09