The Caezars - Welcome To The Mainstream 2013 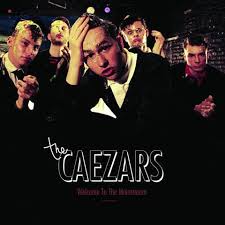 These young English lions  managed to shake things up back in 2010 with their "wild and greasy rockabilly" debut  album"Shake Down" .Back then the band was a four piece and many people out there were  looking at them as the next big.Last year they  released a stellar ep  and now the band's back with their sophomore album "Welcome To The Mainstream". Laying a smack down  of 12 originals tracks that bring it on.Yes we get more greasy rockabilly and garage as well as some revved up rock n roll.This is big and bold and maybe a real stab at hitting the mainstream .Highlights include : "I’m Just Bad ', " You Can Love Me ", " Broken Hearted And Mean " and the kool " Heartache Overload ". There is enough here to keep the old fans happy and still bring new fans into the fray.Sure there is a bit of a different tone from the band's debut  but this is a really good and solid effort that is well worth throwing a few bucks down on. Check it out! https://www.facebook.com/thecaezars     http://www.thecaezars.com/