The Kasketeers - The Dead Boys of Psychobilly 2013 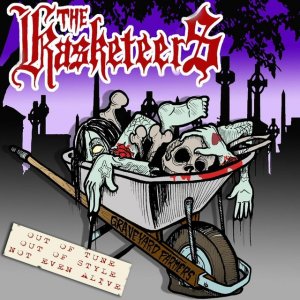 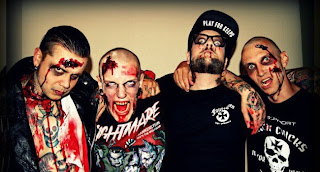 Since 2009 The Kasketeers have been making  some noise with their horror themed psychobilly .Along the way these psycho's have gained some notoriety .In 2010 they released their debut album " Wake Up The Dead" a surprisingly good  disc that managed to catch more than a few people off guard.It even managed to  snag some airplay here in North America .Now the band is back with it's follow up release "The Dead Boys of Psychobilly" and it's a good one .This puppy strolls in with 12 psycho rockers that grab your attention and just like their first album there is way more going on here than what meets the eye.This isn't your run of the mill  horror based psychobilly band.  Highlights include: "Wild and Free", "Zombie Man","Big Black Hearse To Heaven" and"Set Sail".
Personally I'm really not into the horror angle but The Kasketeers are one band that do pull it off damn well and musically this seems to be a band that can probably pull off more than you and I think.These guys are really worth checking out. https://www.facebook.com/pages/The-Kasketeers/164963697618  http://www.reverbnation.com/kasketeers

Email ThisBlogThis!Share to TwitterShare to FacebookShare to Pinterest
Labels: 2012 psychobilly punk horrorpunk, The Kasketeers - The Dead Boys of Psychobilly 2013 Sweden