The Silver Shine - In The Middle Of Nowhere 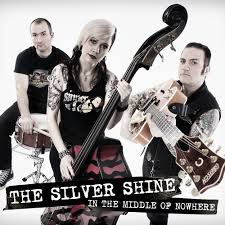 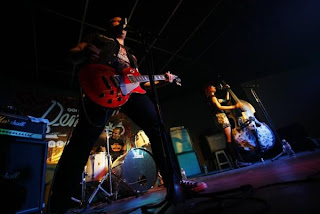 Hungarian "punk n rollers" The Silver Shine are one busy lot.It seems that they are either in the studio and or are  touring non stop. Since 2004 these kats have been blurring the lines between punkabilly and psychobilly to such a degree that most fans ,haters and critics probably really don't know which side of the line  to put them.I'm one of those who think they lean more towards punkabilly than psycho.That said The Silver Shine  have just dropped their 7th album "  In The Middle Of Nowhere" and it's one pretty solid release .Sure it may be more of the same but that's not a bad thing .Clocking in with 8 originals and 2 covers this may be their  best album yet.One reason for this is that the band's bassist Krista Kat is taking on more of the vocals duties.Along with front man Ati Edge this gives the band  2 strong vocal leads .Highlights include: " Never Again ","If I Was To Start It All Again","Faded Newspapers" and "On the Way Back Home ". The Silver Shine are a band that have a kool and unique sound and they(the band) are on top of their game here.You may want to drop a few bucks down on this puppy.
http://www.thesilvershine.com/  https://www.facebook.com/thesilvershine
Posted by Slams Reviews 2 at 20:15

Email ThisBlogThis!Share to TwitterShare to FacebookShare to Pinterest
Labels: The Silver Shine - In The Middle Of Nowhere punkabilly psychobilly Hungary vintage punk rock and roll