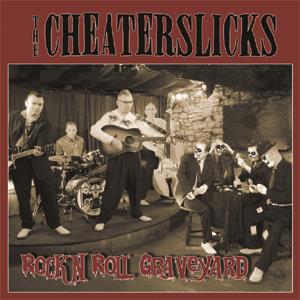 Some bands ride on the fact that they have a little  pedigree and think that's all  they need to be successful.  The Cheaterslicks  on the other hand have a ton of pedigree but man these guys  not only work it but they  continue to up the ante.Hailing from Bristol,England, the band has developed a good size following on both sides of the Atlantic. Their debut album "Rev Up,Burn Out" was more than impressive and now 2 years later the follow up is out.  "Rock'n'Roll Graveyard" serves up 18 tracks of really kool rockabilly that will definitely make you pay attention.This is rockabilly with shades of country and some blues  thrown in the mix.There is also some kool harp injected into this puppy.Highlights include: "Restless Wind","Nothing To Lose","Bad Bad Girl" and the title track "Rock'n'Roll Graveyard ". Better than their first album and easily one of the best releases this year.What we have here is a band with a ton of cred that again has delivered the goods.Highly recommended!  https://www.facebook.com/thecheaterslicks?fref=ts   http://www.thecheaterslicks.com/home
Posted by Slams Reviews 2 at 04:33