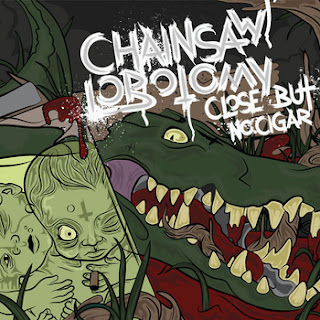 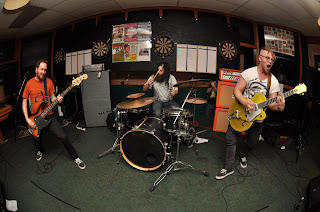 A few years back Chainsaw Lobotomy  emerged from the primordial ooze of Welland, Ontario and quickly made a name for them selves. Here was  a psychobilly band that at times sounded like skater-punks lost in the swamps of Louisiana .You could ask 10  people to describe their music and you probably would get 10 different answers. Despite this in 2010 the band's 3 song demo managed to get some good airplay in Ontario. So it has been a bit of a wait for the band's debut album.  Close, But No Cigar drops in with 10 tracks that best can be described as a swampy stew  of mental chaos that goes down surprisingly  smooth .This is a band that is truly "beyond genres" and still manages to hold it all together.We get blues,psychobilly, punk,bluegrass and a swamp donkey thrown in too boot( just kidding about the donkey).Highlights include:"Swampwater","Sexcetelyne","Withinsanity" and the kool anthem "Too Dead Too Skate". There is much to like about this album  even though it may not be for everyone.If your looking for something a bit out there this puppy is for you. Close, But No Cigar is like a trip into a dark and dangerous swamp that's kinda kool.Recommended!  https://www.facebook.com/chainsawlobotomymusic?group_id=0                          Free Download  http://chainsawlobotomy.bandcamp.com/album/close-but-no-cigar
Posted by Slams Reviews 2 at 18:05