Tennessee Voodoo Coupe - Over The Moon 2013 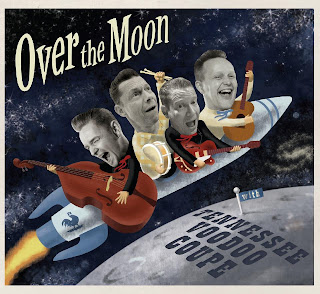 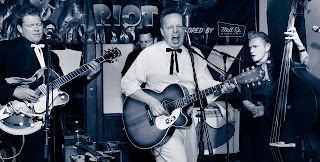 Deep from the inner bowels of Toronto Canada comes "100 proof reckless hillbilly jive" courtesy of Tennessee Voodoo Coupe.These kats have been dishing out a brand of hillbilly/rockabilly  since 2007 and have made a pretty good name for themselves in the process .In 2011 the band released a solid debut " Radio Transcripts:Live In Person" that  caught more than a few people off guard .Now the band has just dropped their first  official album "Over The Moon" and I gotta say it's pretty good. TVC scores here with 9  infectious tracks(7 originals and 2 covers) that play to the bands strengths.This  is a great mix of hillbilly and rockabilly with shades of swing. Highlights include: "Tallahassee Hillbilly Hot Rod Voodoo Gal","Geraldine"," Rock'n'roll Heart" and "Hillbilly Bop".The band also does a kool cover of " All the Time" that kicks the album off .Overall this is  not an album that will blow you away, it's not that kind of billy music but it is  very solid, enjoyable and sounds right.You may want to check this puppy out  https://www.facebook.com/tvc.to
http://bigrudejake.ca/the-bands/good-n-rude