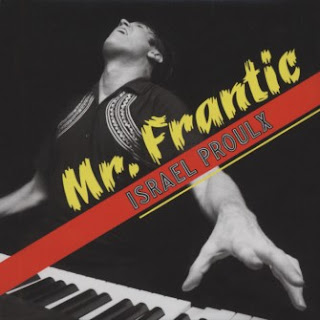 The province of Quebec  has a pretty good  rockabilly/rock n roll scene  and you could argue that the city of Montreal  is where it's at for Canadian rockabilly.Israel Proulx comes out of this scene and he may not be as well known as some of his counter parts but that sure in  hell will change.This kat has been knockin' them dead with a kool brand of  hard driving piano attack rock n roll for a few years now. MR. FRANTIC is his first album for Wild Records  and man it's a duesy. Clocking in with 12 tracks that more than tickle the ivory.This is more straight up rock n roll than rockabilly and is sung in both French and English. Highlights include: " Honky Tonk Song", "Le Train Qui Siffle"' "Mon Bebe Sait Comment" and "Saguenay Boogie". Honestly there are no dogs here,this is one very solid album . "MR. FRANTIC" is frantic,fun, rockin and at times just outright killer.Recommended  https://www.facebook.com/pages/ISRAEL-PROULX/165485626846590  https://twitter.com/IsraelProulx
Posted by Slams Reviews 2 at 13:42