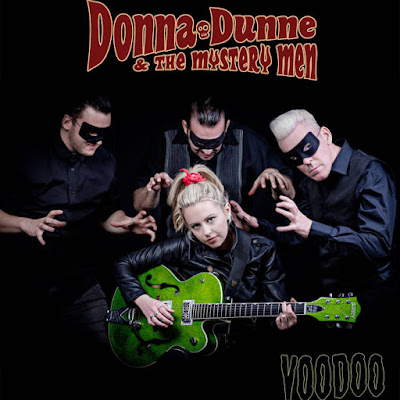 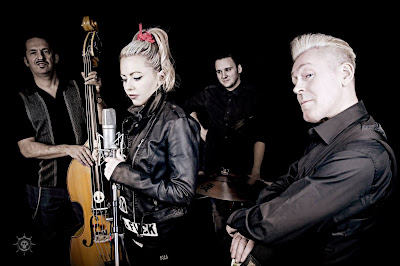 Back in 2012 Donna Dunne started making a name for herself  with the release of the single "Woman In Black". A  kool slice of bluesy rockabilly with tinges of gypsy and Americana .Many considered her  a "retro-revamped rock n’ roller"but her sound is also a mix bag of roots music. Over the years she has earned a rep as a no bullshit , hard working artist who knows what she wants. In late 2016  in a surprising move she hitched up with psychobilly legend and Diablo Records head honcho Phil Doyle.Originally they were going to do a single but then quickly the goal became an album .The buzz about this project was and is  pretty solid .Then word of  who the band ,The Mystery Men were got out and that even jacked up the buzz more.Doyle had brought in Phil Polecat on Bass & Craig Erikson(Moonshine Stalkers) on Drums ,which had many wondering if Donne Dunne was truly outside of her wheelhouse. The answer to that is a resounding no and proof is in the results.The album "Voodoo" has now dropped and it's a winner.This puppy is a strong,refreshing and diverse outing that is hard to resist.Clocking in with 12 tracks of a delicious brew that mixes blues, gypsy,rocknroll and rockabilly.We get  rockers to ballads, all of which come off with a stout swagger.Considering who's in this band some people may think this is a restraint affair but don't let that fool you .At times "Voodoo" is haunting as well as powerful. Highlights include: "Lovespell", "Mystery Man", "Shame","Voodoo" and "I Huffed &I Puffed".