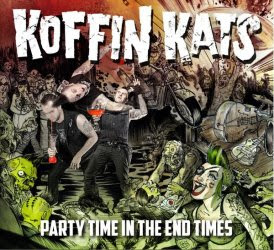 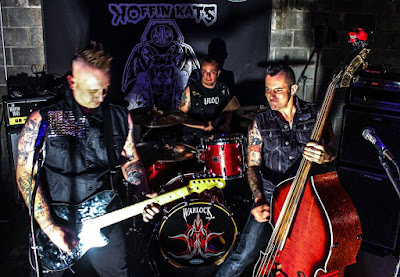 It's been over 13 years now since the Koffin Kats crawled out of the underbelly of Detroit .In that time they have released  7 damn good albums and arguably have become one of  America's most influential and important psychobilly bands.They  have a very distinct style/sound  and that's what has always separated them from other psychobilly bands Hell their influence can be heard in a whack of bands and not just young ones.That said it's been 3 years since the stout "Born Of The Motor" was released and now the band has released the long awaited follow up "Party Time In The End Times". No surprise here as this puppy comes out of the gate damn strong and hits hard.We get 12 tracks of kool madness but this time out the band leans back  to their (horror) roots.As a result it it's not as in your face as the last couple of albums and it's actually better.Also the band are back to the original lineup and that helps make this a strong and refreshing release.Highlights include: " Witch In The Woods", " Party Time in the End Times", "Dark World" and "Radiator Chains"
After all this time The Koffin Kats sound like a young hungry band on " Party Time In The End Times" and that's kool .This is another killer album from a top shelf outfit. Highly recommended.
https://www.facebook.com/koffinkats/    https://www.koffinkatsrock.com/