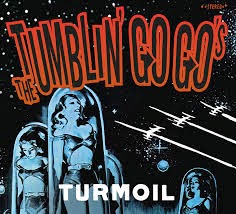 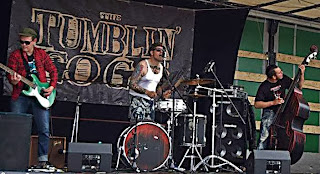 For just over 10 years now The Tumblin' GoGo's  have been spewing out kool and powerful rockabilly/psychobilly .Hugely underrated this is a band that many have heard mention of but few have actually listened to.Let's just say this is a killer Dutch band and a busy one to boot.With a run of 6 albums  including last years stellar "Paralyzed" these boys have a hell of a discography and one that's hard to beat.
If that's not enough the band's 7th album "Turmoil" is now out and it's pretty damn good.Clocking in with 11 tracks to wrap your head around. This is one barn burner that sits at the corner of rockabilly and psychobilly but stretches down the street to country, a little punk and blues. Highlights include:"Truck Driver", "Lost In Corpus Christi", " Stiletto Heels", and "Turmoil"
The Tumblin' Go Go's are a band that not only should you be aware of but also one that is in your library .Turmoil is one of the better albums this year and a good starting point if you don't know who these guys are! Highly recommended !  http://www.tumblingogos.nl/         https://www.facebook.com/thetumblin.gogos?fref=ts