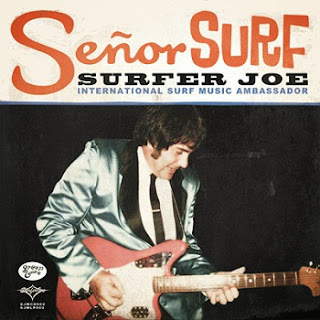 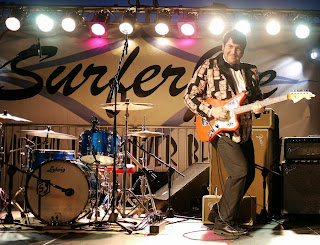 Anyone who claims to be a big surf fan knows who Surfer Joe is and rightfully so. He is the "International Surf Music Ambassador". From putting on festivals to helping set tours up to bookings to hosting a radio show and he is also  a musician .The man has sat in with many top surf bands and also formed the Wadadli Riders(2005-2011) , his current band  is The Boss Combo.So that brings us to Surfer Joe's first solo album " Señor Surf ". This puppy washes ashore with 12 pretty fine tracks of traditional surf that actually sound like they were done in the early 60's.Of the 10 originals here a few of them date back a couple of years and one "The North Swell" was released previously on  Double Crown's "Brave New Surf" compilation in 2011.Highlights include: "Macaroni Pie","Waveboard Action","Twangy Drippy Twisty" and "El Señor Surf".
This is one killer surf album no matter how you look at it  and if your a surf fan it is a must have.If your not into surf this is a great introduction.Definitely one of the better surf albums to come down the pike in the last couple of years and that's saying something. Recommended http://www.lorenzosurferjoe.com/    https://www.facebook.com/lorenzosurferjoe
Posted by Slams Reviews 2 at 18:43