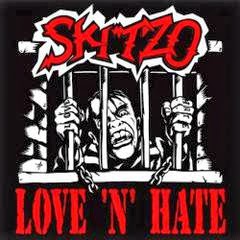 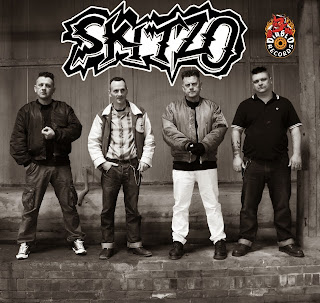 Way back in the mid eighties Skitzo was a psychobilly band that seem to have it going on.Then it kinda went off the rails when the band's musical direction changed .With that and  some membership changes the band was done by 1990. The band's first album released in 1987 "SkitzoMania"is still seen today by many as a classic psychobilly album.During  the band's first comeback in 1995 they released the killer ep "The Glove" and by end of 1997 they were gone.Now  in 2013 Skitzo are back with their fourth album "Love'n' Hate". Guess what this puppy is actually damn good and in many ways may be there best effort yet.Yes it is old school psychobilly and the band sounds in fine form here.Hell they even show some restraint at times and that's a good thing.

Highlights include:"The Blade","Love'n'Hate"," D.E.A.T.H." and a  solid redo of "Doctor Death". Also the bonus track is a redo of "SkitzoMania" and there is a kool cover of "Somewhere Over The Rainbow".Like many people I really didn't know what to expect from Skitzo. Safe to say "Love’n'Hate" will surprise many by just how good it really is. Skitzo has made a big statement here. Recommended  https://www.facebook.com/groups/269932416444591/   https://www.facebook.com/pages/Skitzo-UK-Official-Psychobilly-page/246527663201
Posted by Slams Reviews 2 at 14:08