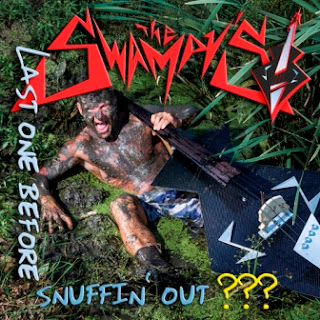 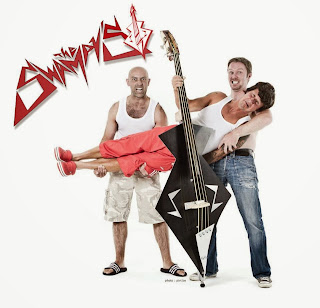 Way back in 1986 The Swampy's  crawled of of the Lowlands . In 1988 this Belgium psychobilly band  released  an ep and then their debut album  "Come back to the Swamp" all to  mix reviews.By 89  the band was gone.Over the years their recordings became very sought after.In 2009 these psycho kats  emerged again and have been  on a mission ever since.The band's 2nd album is finally here "Last One Before Snuffin' Out???",guess what this  is a surprisingly good and solid slice of old school psychobilly.Coming in with 10 tracks these boys stay the course and have never sounded better.Highlights include:" Born In 65 ", "
Valley Of The Dead"," Anthony Starck" and  a kool redo of  "The Coffin Maker" (off their 1988 ep).
This is easily The Swampy's best release and a damn good comeback album too boot.Old school psychobilly fans  should pick this up but even if your not this puppy is worth throwing some of your hard earned cash down on  https://www.facebook.com/TheSwampys
http://www.theswampys.com/
Posted by Slams Reviews 2 at 12:56

Email ThisBlogThis!Share to TwitterShare to FacebookShare to Pinterest
Labels: The Swampy's - Last One Before Snuffin' Out??? 2013 psychobilly Belgium old school psychobilly