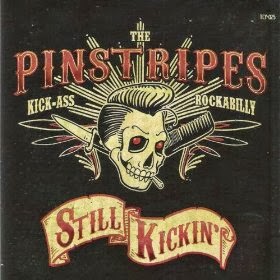 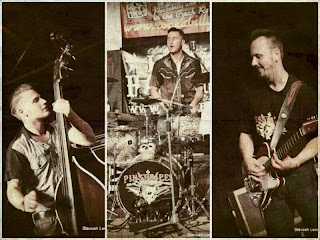 Since crawling out of Germany's southern swamps in 2001 The Pinstripes have been dishing out a brand of "kick-ass rockabilly". What they play is a fusion  of 50's and 80's billy with a bit of an edge that comes off as pretty kool rock n roll. So far the band has delivered the goods with  two damn fine albums,"First Kick"(05) and"Road To Hell"(09). Now in 2013 comes the band's 3rd and best best album yet: "Still Kickin’".This puppy strolls in with 13 tracks that will light a fire under your butt.These kats have upped the ante with 10 originals and 2 are  in German(a first for the band). The band stays mainly on a rockabilly course but we do get shades of country, surf and psychobilly on a few  tracks.Highlights include: "Man Lebt Nur Einmal", "Cheat On Me", "Hot Little Mama"and an interesting cover of Jethro Tull's "Locomotive Breath"(with some kool blue's harp).

From the song writing to the final execution The Pinstripes are in fine form here .It may have taken 4 years for this puppy but it was worth the wait and let's hope the band doesn't make us wait that long next time.Recommended  https://www.facebook.com/pages/The-Pinstripes/174274645954638  http://translate.google.ca/translate?hl=en&sl=de&u=http://www.thepinstripes.com/&prev=/search%3Fq%3DThe-Pinstripes%2Bstill%2Bkickin%26biw%3D1420%26bih%3D745
Posted by Slams Reviews 2 at 10:31