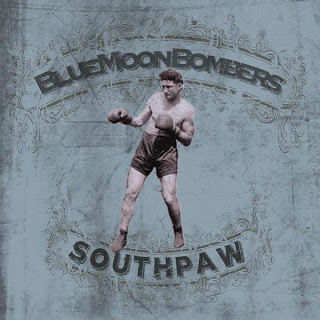 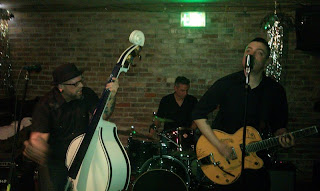 In 2012  the Blue Moon Bombers released a pretty good little debut album called "Bombs Away"  than you could say went under the wire.Not to be deterred the boys went back to the woodshed and have returned with another very solid album.,No sophomore jinx here "Southpaw"  punches the ticket with  13 tracks  that range from kick-butt rockabilly to folksy blues,surf  and psychobilly.This is  more diverse and stronger than their debut.The Bombers are one band that can truly claim  to be too rockabilly for the psychos and  too Psycho for the rockabillies. This is  raw and rough and that's  a kool strong point for the band .Highlights include: " My Baby Don't Love Me" , "Devil Inside", " Nightmare Girl " and " 54 Hellevedere".The Blue Moon Bombers are a band that deserve your attention.Recommended  https://www.facebook.com/pages/Blue-Moon-Bombers/101200483304625?fref=ts  http://www.reverbnation.com/bluemoonbombers
Posted by Slams Reviews 2 at 13:56