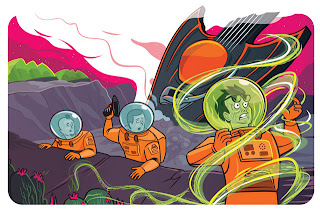 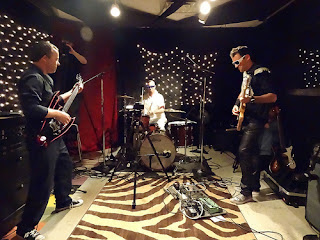 You just know with a name like Aloha Screwdriver that this is one killer band.Since 2009 these Californian kats have been playing a kool brand of surf meets twang  that has been called "high octane surf" and rightly so.In 2011 the bands ep "No Way Out" hit a chord with many surf lovers.Now there back with their debut album "The Haunted Planet"and man it's pretty damn good.Lambasting us with 11 tracks(8 originals) of surf/Instrumental rock.This not the traditional surf your daddy listened too.What we have here is a merger of traditional surf,spaghetti,horror,punk,smash mouth surf and rockabilly.If that wasn't enough for you we also have a  healthy dose of twang some Russian folk and even tinges of metal / prog rock to boot .Highlights include:"Click Bang Boom", "A Deadly Demise", "Creature Screecher" and "Doom Buggy Hellride". At the end of the day this is one hell of a groovy ride and you could sum it all up  in 4 words: kool album,kool band. Highly recommended  https://www.facebook.com/pages/Aloha-Screwdriver/230524580808  http://www.alohascrewdriver.com/
Posted by Slams Reviews 2 at 13:44