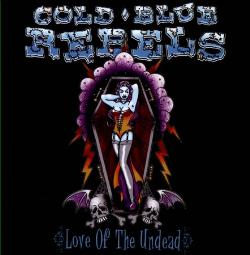 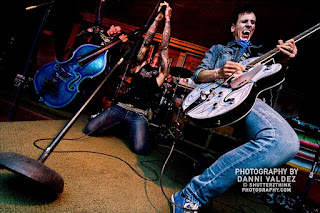 A couple of years ago The Cold Blue Rebels  released their debut album "Blood, Guts, n' Rock & Roll" and it caught a lot of people off guard.Here was a new group with a killer album that pushed the limits of billy music.The one question about the band was if their debut  was a fluke or not.Well the follow-up is here and one thing for sure is that these guys mean business. "Love Of The Undead"rocks in with 6 tracks that will kick your ass.Again the band pushes the genre limits  from rockabilly to punk/hard rock to psychobilly.There isn't a bad song here.One track however really stands out "Whip Me One More Time" has some kool harp and slide guitar, you could call this psychobilly boogie blues .The Cold Blue Rebels  are not just  flexing their musical muscles here ,they're backing it up.Recommended https://www.facebook.com/pages/Cold-Blue-Rebels/126896400678007  http://www.reverbnation.com/coldbluerebels
Posted by Slams Reviews 2 at 08:21