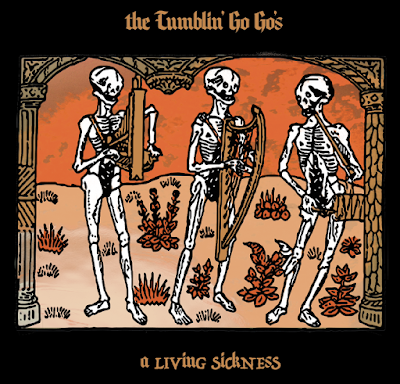 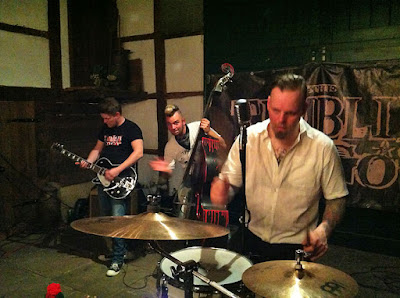 When it comes to neo rockabilly / psychobilly groups ,The Tumblin' Go Go's take a back seat to no one. Sure that may not be as well known as some of the big guns out there but don't let that fool you.These cats have blazed their own path over the years and as a result they have  one hell of a stellar catalog that will color you impressed.That said the band has dropped their latest and most surprising effort yet.With  "A Living Sickness"(the band's 8th album),they slam on the brakes, really mix it up and rip out of the box.We get the usual neo- rockabilly/psychobilly with flares of surf, the  blues and shades of country ,but that's not all. This time out the band really defies the genre lines.Throw in a whack of sound effects,some low-fi ,some psychedelic and even more blues.This is dirty and dark, yet freakin' damn kool. At times it seems erratic but it draws you in and maintains your interest.Highlights include: "Blood Red Eyes", "Shitkickers", "Snake Demon" and "Salvation".


The Tumblin' Go Go's have taken a big gamble with " A Living Sickness" .As a result this puppy is eclectic as well as refreshing and daring.If your willing to take a chance, the pay off is big. Highly recommended!
https://www.facebook.com/The-Tumblin-gogos-307816876220150/     http://www.tumblingogos.nl/
Posted by Slams Reviews 2 at 08:06