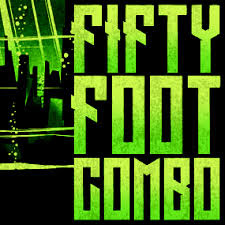 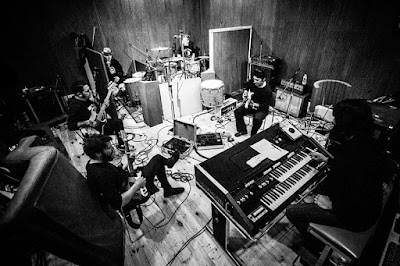 Fifty Foot Combo, the kings of "Monstrophonic" sound are back and ready to kick ass in a big way. If you don't know who Fifty Foot Combo  are you should. Back in 2006 and after 6 albums these kats packed it in. Their brand of wild garage,surf and trashy rock n roll had made them one of the best bands out there.They were popular ,had a killer rep,were in your face and they always delivered the goods.Back in 2012 the band got back to together and started playing gigs .In 2014 they really started to get out and have released a couple of singles (2014, 2016) with guest vocalist.Now in 2016 they're back with a self titled album,their first  since 2004. So the big question is it any good.While hell yeah, it's damn good and these kats aren't holding back.We get 13 tracks of kool, at times raw and intense garage/surf  rock n roll.In other words just what you would expect. From wall of sound to spaghetti infused to garage to surf and  a little psychedelic the band covers a lot of ground and does it well.Hell we even get 2 versions of "Wild Man"  Highlights include : "Accident Or Incident", "Decompression", "The Maker" and "The Descent"

Fifty Foot Combo are on a mission here and this is right up there with their best works.Not a easy feat.This is loud, proud and just killer rock n roll.Highly Recommended!!!
https://www.facebook.com/fiftyfootcombo/timeline
Posted by Slams Reviews 2 at 12:20