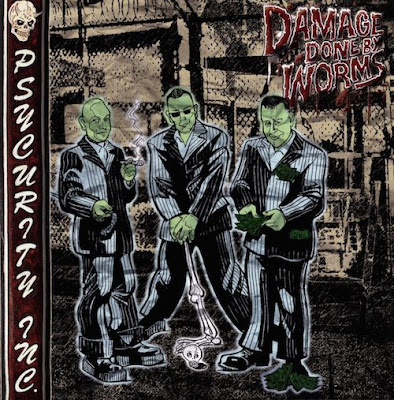 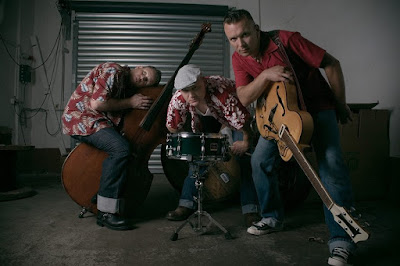 Damage Done By Worms are back, but it's not like they really went away.Since forming way back in 1989 these Berlin kats have released 3 albums,an ep  and appeared on many compilations. The last album released was the pretty stout "Tonight" released back in 1999.Over the years the band has continued to appear at many festivals as well as other smaller gigs,most of which have been in Europe.As a result the outfit  usually gets overlooked and kinda has stayed under the wire here in North America.Make no mistake here ,this is a serious killer and unique band. If you don't believe me just check out any of their releases.That said the long awaited 4th album "Psycurity Inc." came out earlier this year and it's one damn impressive effort.This puppy kicks the door in with 15 original tracks of psychobilly that meld old school psychobilly,neo rockabilly, surf,and rock n roll with a bit of punk attitude into a refreshing  stew. We even get some harp action tossed in for an add attraction,what's not to like.Highlights include: " Showgirls", "Bullshit", "Psycurity Inc.","Horror" and "Your Way".
They say good things come to those who wait ,well in the case of  " Psycurity Inc." that's true.This is a smart ,diverse and killer album that is simply top shelf.  Damage Done By Worms have made a big statement here and hopefully we don't have to wait a long time for their next album.Highly Recommended!!
ttps://www.facebook.com/DDBW.de/timeline
Posted by Slams Reviews 2 at 12:59