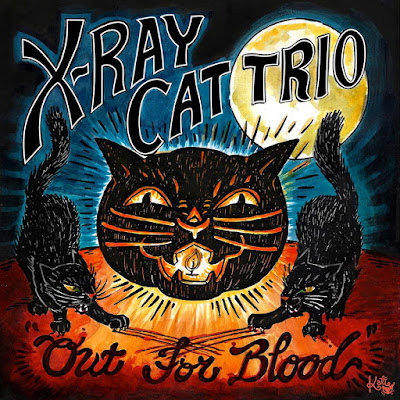 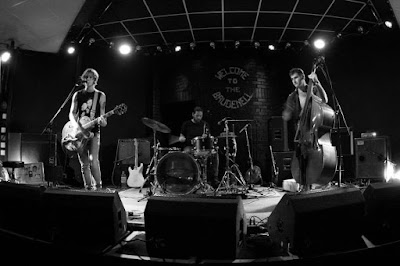 If your looking for dark, raw and tough  rock n roll  the X-Ray Cat Trio are a band you should check out.This surf based band out of Leeds has been delivering the goods since 2009 and are more that just surf outfit.These kats mix rockabilly,psychobilly,Link Wray, punk and more  into a a kool brew that's hard to resist.They released the pretty good ep "Bloody Deeds" back in 2014 and managed to gain some international attention.Now in 2015 they about to unleash their full debut album "Out For Blood'.
This puppy comes in with attitude that snarls hard with 13 tracks that for the most part, pack a punch.We get only 2 tracks with vocals(both are pretty good) and the rest of the tracks are instrumentals The band also throws in some killer saxophone on a few tracks as well as a theremin added to the mix,all which ups the anti here.Highlights include: " Surfing Sasquatch", "Berenice", " In The Mausolem" , " Rockero Fantasma" and "Wolfcop".
Out For Blood struts in with a whack of swagger,maintains it and leaves you wanting more. Yes it's dark,raw and rough but hell it's also damn good. Recommended!   https://www.facebook.com/xraycattrio/timeline?ref=page_internal
Posted by Slams Reviews 2 at 10:45