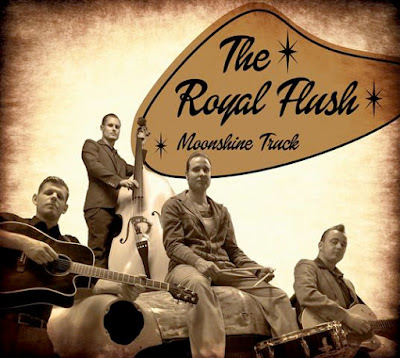 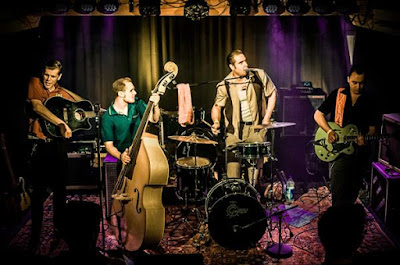 Have to be honest here: I had never heard of the Royal Flush until just recently and when I actually first heard them I was blowin' away. Hailing from Switzerland  these kats formed back in 2006 and have been laying down some serious "raw and wild" rockabilly/rock n roll.Hell  Rockabilly Stomp Records(the same people who are behind  the successful  Rockabilly Stomp Weekenders)  made The Royal Flush their first signing.The result is the band's debut album "Moonshine Truck" and this puppy is pretty damn stout.Clocking in with 14 tracks that will color you impressed .From start to finish we get killer straight up rockabilly/rock n roll that doesn't let up.No filler here folks, this is all good.Highlights include: "We Wanna Rock, Rock Wanna Roll", " Friday Night", " Moonshine Truck" and "Let's Roll".

No matter how you slice it, this is an impressive album. Having been  recorded at the Black Shack Studio only adds to the end result. One of the best this year and a must have Highly recommended!!!
http://www.the-royal-flush.ch/   https://www.facebook.com/theroyalflush?fref=ts
Posted by Slams Reviews 2 at 11:54