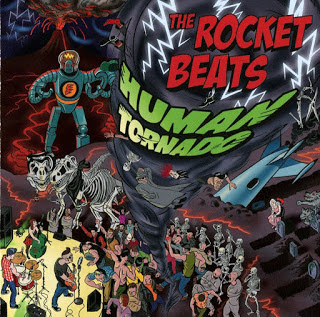 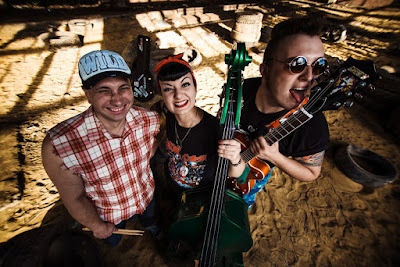 The Rocket Beats are a young,exciting and hungry psychobilly that have been turning heads since 2012 when they came crashing out of Russia.Their debut ep "Welcome To The Rocket Beats" (2013) was and is a pretty good ep that managed to garner the band some deserved attention. After all this is old school psychobilly done well and you gotta like that.Now the band is back with their debut album " Human Tornado" and lets just say this puppy kicks butt.These kats have really upped the anti here.Coming in with 11 tracks of old school psychobilly that hit you square and  move with urgency.Hell, The Rocket Beats bring all the elements of good old school psychobilly to the table as well as some pretty good female vocals(mostly backup but lead on one track) too boot.Highlights include: "Rocket Alert Theme", "Dinosaur Rock", " Let's Shout Again" and "Human Tornado".
There is nothing here not to like," Human Tornado" is that good and you really don't have to be a fan of psychobilly to enjoy this puppy.The Rocket Beats are one of those bands that you best keep an eye on. Highly Recommended !!    https://www.facebook.com/TheRocketBeats/timeline
Posted by Slams Reviews 2 at 17:34