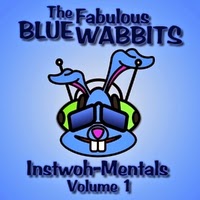 Ladies and Gentlemen ..."Four decades of surf ...with three and a half decades missing" ... The Fabulous Blue Wabbits. That's right this surf band started out as the Blue Diamond way back in 1964(who says Canada didn't have surf bands back then ) and was in action  up to 1972.As usual life gets in the way and in 2006  two of the members started jamming part time.Over time they became The Fabulous Blue Wabbits.That's the short history  but this part time band has dropped one hell of a killer surf  on the unsuspecting masses,I kid you not. Instwoh-Mentals, Vol. 1 the band's debut is nothing short of sweet  and it's almost impossible to believe this isn't a seasoned pro band .Hell most so called professional band's couldn't pull this off .Riding the wave in with 16 kool surf tracks  that clock in at just under 50 minutes ,this is pure 60's surf .When hard core surf fans talk about sound,  tempo and texture  this is what they are getting at ,it's all here. These kats stick to first wave surf and do it extremely well. Highlights include: " Clam Digging", " Blackwater","California Longboard" and "It's a Rock Billy".
If your a fan of surf  music you want to be running out to get "Instwoh-Mentals, Vol. 1" and even if your not a fan of surf music  you should check this puppy out . If this was on a major label  of any kind you would be hearing a whole whack noise  about it . The Fabulous Blue Wabbits  have  delivered one of the best albums so far this year by anyone in any genre. Highly Recommended!   http://www.wabbitwanch.net/wabbit/
Posted by Slams Reviews 2 at 14:49