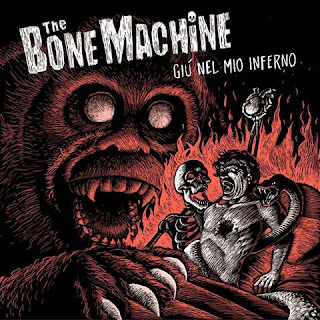 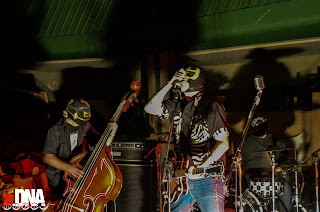 Since 1999 these Italian psychos  have been known as "the diabolical perversion of Rock'n'Roll". What these kats play  has been called "psychotic,primitive rockabilly", but you could ask 10 people and get 10 different answers that vary from trash to garage to horror punk and psychobilly.You get the picture here.Anyway with a handful of killer recordings (albums ,eps and splits) under their belts they have managed to carve out an interesting niche for themselves Now the band has released "Giù Nel Mio Inferno" on an unsuspecting  public .This is one hell (no pun intended) of an album  clocking in with 12 hammering tracks that one can't help but like.As on past efforts we get a rock n roll swamp mix with every thing from blues to surf throwin'  that oozes and kicks crazy and it's all in Italian.Highlights include: "Era Il Re","Surf Nella Palude Morta","Twist Dell'esorcista" and " Sei Nei Guai".
At the end of the day The Bone Machine have again put out a damn fine album.If you love rock n roll you'll love  "Giù Nel Mio Inferno". Highly recommended .https://www.facebook.com/pages/THE-BONE-MACHINE/104190609631485    http://www.thebonemachine.it/