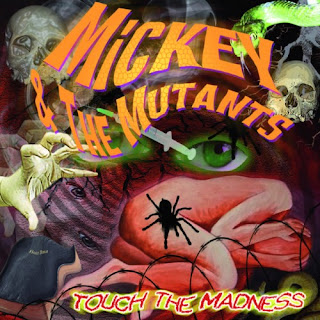 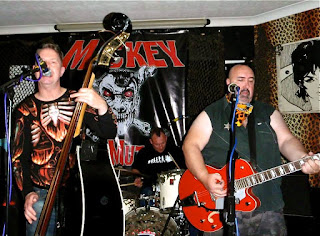 Mickey & The Mutants  may be a new band  but when you have an ex-member of The Meteors and Guana Batz plus an ex-Shark  you just know they're going to make waves.Sure there has been some detractors but the buzz around the band has been pretty good even on this side of the Atlantic.That said you just know that some out there will have high expectations placed on the band. Anyway Mickey & The Mutants have just dropped their debut album " Touch The Madness " and it's a solid effort This puppy comes in with 12 tracks of old school psychobilly than at times slams into "Filthy Rock n Roll". There are a few  tracks here than are slow paced(you could say atmospheric). Highlights include: "Blonde Haired Assassin", "Burn You Sinners Burn"," Mind Control" and "Zombie".
Overall Touch The Madness won't blow you away but it is a very strong debut album that's a bit different from the  usual psychobilly and one that is worth checking out.    http://www.reverbnation.com/mickeyandthemutants  https://www.facebook.com/MickeyAndTheMutants?ref=hl