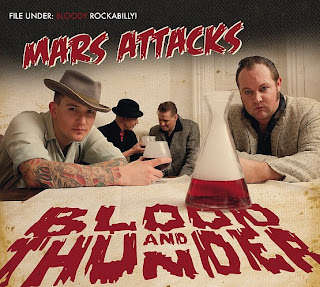 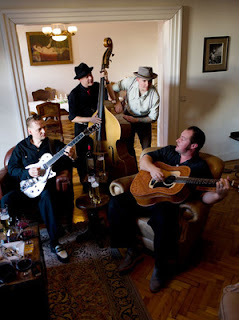 Hard to believe these Euro kats have been  at it since 1998.These guys have really worked it over the years and as a result they have developed a  following around the world.Oh and they are also known as one of Europe's better rockabilly bands.Now in their 15th year the band has released  album #6: "Blood And Thunder" and to me it  kinda has a different feel to it than some of their previous releases  .This is rockabilly with a healthy dose of blues(some killer harp here),a dash of country flavoring added in the mix,some ballads and as well the band's trademark trumpet. We get 15 tracks here that add up to a solid and interesting album.Highlights include:" Count To Three","Blood And Thunder", "Deep Down In The Mud" and the kool "In The Alley Baby". Probably not for everyone but "Blood And Thunder"  is still a pretty good  album  so you may want to check it out. https://www.facebook.com/marsattacksrockabilly
http://www.marsattacksrockabilly.com/
Posted by Slams Reviews 2 at 16:20