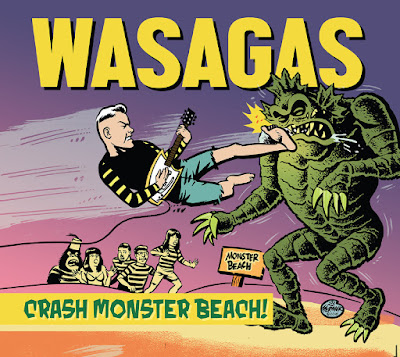 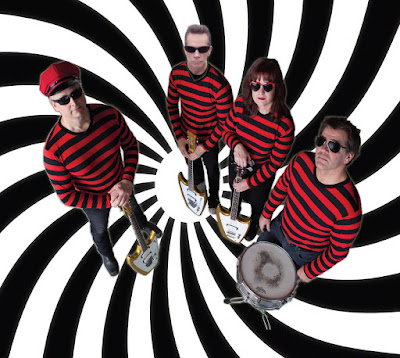 Since returning from the grave back in 2014, Mark Malibu & The Wasagas have been making a lot of  noise and creating some major wave action. They have delivered some top notch surf rock with 2 very fine  albums: "Original Surf Punk Recordings" (2014) and "Return Of The Wasagas" (2017).If that wasn't enough ,they also gained a rep as a damn kool live band.Not standing still they have released their 3rd and best album so far,"Crash Monster Beach".This time out they don't pull any punches and land an intro and 12 hits.This is damn confident instrumental surf that ranges from traditional surf to garage and surf punk. Hell it's also modern surf that is vigorous and straight up kool.We get 3 covers here and the band also throws in "Hey Chiwawa" which appeared on "Original Surf Punk Recordings". It's well produced and executed but then again that's kind of a trademark for them.From start to finish this puppy reels you in and doesn't let go.Highlights include: "Punch Out At The Beach", "Crazy Mouse", "Astro Bot" and "Fuzzy Love".

Mark Malibu & The Wasagas have hit a home run with "Crash Monster Beach".It sounds great and is freakin' stout .You really have to throw down some of your hard earned cash on this baby and your better half will thank you for it.Highly recommended!!
https://www.facebook.com/Wasagas/
https://wasagas.com/
Posted by Slams Reviews 2 at 10:08