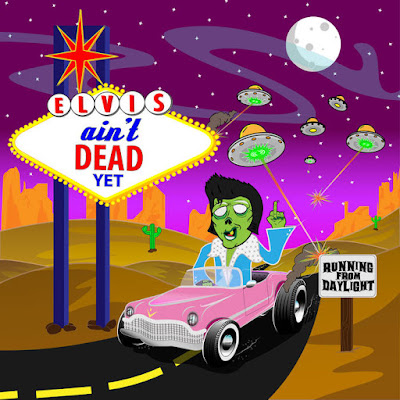 Since crawling out of the primordial muck of Southwestern Ontario in 2017,  Running From Daylight  have been on a tare.  First came their 3 song ep "Coffin For Two" and then they hit back with| the kool single  "Mary Jane" .Along the way these young psycho upstarts have manged to snag some major airplay and not just in Canada. Not standing still they have just unleashed  their debut album, "Elvis Ain't Dead Yet".This puppy snarls and bites with 7 tracks  of  mainly rockin' psychobilly. They also add shots of punkabilly,horror, spaghetti and hard rock into the mix. It's a  fast and a bit of a loose ride that delivers.Highlights include: " Elvis Ain't Dead Yet", "Mary Jane", Between The Eyes" and "Whole Damn Bottle"

One has to be impressed with Running From Daylight, in less than a year they have put out 3 strong releases .As for "Elvis Ain't Dead Yet",it's a pretty stout debut album that shows this is a band that has it going on and is one you may want to keep an eye on . Recommended
https://www.facebook.com/RFDband/    https://rfdband.bandcamp.com/album/elvis-aint-dead-yet