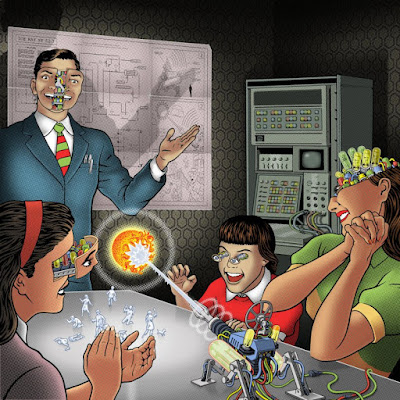 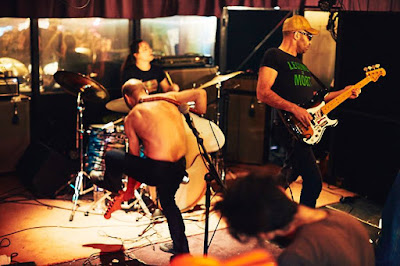 When it comes to smash mouth surf  few bands do it better than France's Arno De Cea & The Clockwork Wizards.These purveyors of "brutal surf " aren't afraid to push the boundaries and relish taking it into the red. As a result some have accused them as been a noise/metal infused band but don't let that deter you.These cats are totally refreshing and freakin' kool. Their first two albums,"Surfs Up" (2011) and "Bug Terminal" (2015) both deliver enough body blows to win the day. Now their back with "Flash Freezing the Sun",a sci-fi epic that delivers a knock out punch.This puppy explodes  with 13 tracks of dark and dangerous instrumental surf rock.For the most part this is fast and hard but there is a couple of  softer tracks that help to ease this frantic ride.There is even one track with vocals.Overall it's their best effort yet and that's saying something.Highlights include: "Volcano Juice","Fluide Glacial" ,"Flash Freezing the Sun", "Extropie Boogie" and" No Comply".


With " Flash Freezing the Sun" these cats put it all out there and have another winner on their hands. If you aren't familiar with Arno De Cea & The Clockwork Wizards , you should do yourself a favor and check them out. This could be the wake up call you have been waiting for.Highly recommended!
https://www.facebook.com/ArnoDeCeaAndTheClockworkWizards/    http://www.arnodecea.com/
Posted by Slams Reviews 2 at 07:07