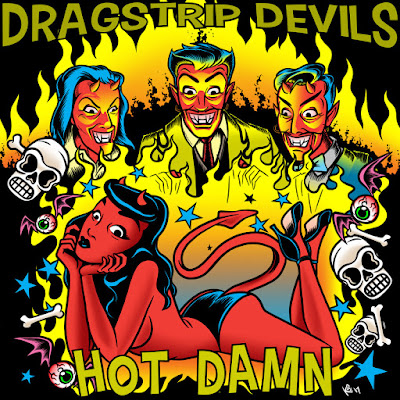 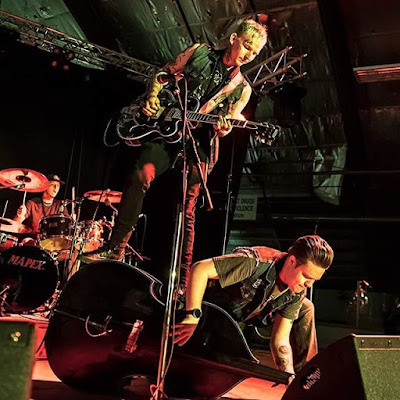 Back in late 2012  one of Canada's koolest psychobilly  band's , Grim Hymn and The Horrors packed it in.Out of their ashes arose a bird with a bit of different stripping,The Dragstrip Devils. These cats quickly releases a self-titled, 6 track ep  of  neo rockabilly \psychobilly  that packed a powerful punch. Since then they have been ripping up the far west of Canada,earning a rep as a killer band.It.s been a long wait for their debut album and now it finally has dropped. While "Hot Damn " is here and this is one kinetic blast of fun .Clocking in with 10 original tracks (including 3 tracks from the ep)   of  rocknroll that cross in and out  between neo rockabilly and psychobilly .It's a fun ride that rocks out and will have you hitting the repeat.Highlights include: "Topsy Turvy", " Hot Damn", Motor Mouth" , 'Knife Swap"  and "Little Red Heels"

You can't go wrong here with "Hot Damn ", The Dragstrip Devils check all the boxes.Hell even the kids on your street will think your kool when they hear you blasting this out. Recommended!!
https://www.facebook.com/TheDragstripDevils/
Posted by Slams Reviews 2 at 09:32