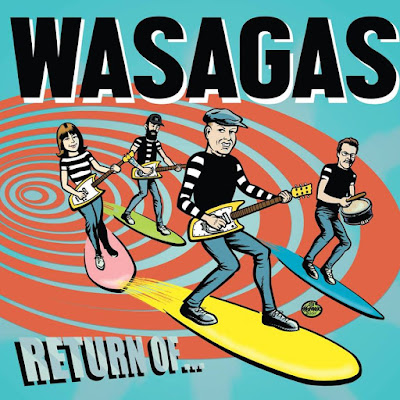 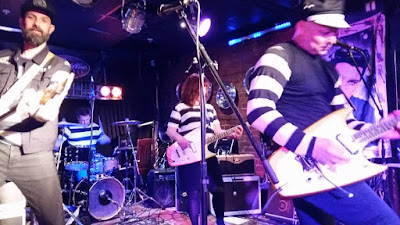 Back in 1979 Mark Malibu & The Wasagas  washed up onto the Toronto punk and immediately stood out from the pack. Been Canada's first surfpunk was no easy chore but they managed to record a handful tracks,some which appeared on a few compilations.After a 3 year run they packed it in and sadly were quickly forgotten. Funny thing thou,in the early 2000's  Toronto burgeoning surf was starting to gain traction and for a few people  Mark Malibu & The Wasagas became a touchstone band. It took a few more years but in 2014 they appeared at The Great Lakes Surf Battle #9 and released the kool "Original Surf Punk Recordings". As a result you could say the game was back on. Now in 2017 they have dropped the  kool and sweet album " Return Of The Wasagas". This puppy craves in with 12 originals and 2 covers of mighty fine surf. For the most part this is aggressive traditional surf but we also  get a range of surf here ,from traditional to spaghetti to surf punk and a little horror surf .From the opening intro to the final track this is one refreshing and fun ride that maintains a stout groove.Highlights include: "Surfin' A Go-Go" , " Boogie Board ", " Spaghetti Summer" and "Ain't Gunna Crash"
There is no doubt about it "Return Of The Wasagas" packs a punch. Mark Malibu & The Wasagas are making up for lost time here.This is a lean and hungry outfit that's bringing it on and having fun too boot. Highly Recommended!!
https://www.facebook.com/Wasagas/
Posted by Slams Reviews 2 at 09:01