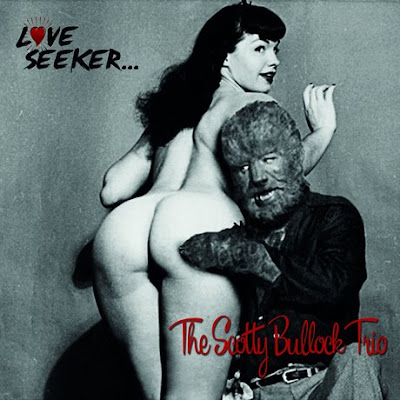 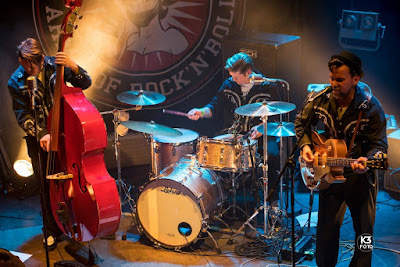 Scotty  Bullock(aka Scotty Schober) has been kicking around now for more than a few years.In that time he's been in a few kool bands :The Stampeders,The Sunny Bottom Boys ,The Duetones and The Swing Rays.His latest outfit The Scotty Bullock Trio has been around since late 2014 and it's his most rockin' band yet.The band's debut album " Love Seeker" clocks in with 14  tracks  that make for a pretty kool listen.We get straight up rock n roll to slices of  rockabilly and country that slide into  outlaw territory. But make no mistake here, this is a rock n roll album that happens to be diverse and it's pretty damn good.From one ballad to all out rockers there is a lot to like here.They also throw a little blues and harp action into the proceedings. .Highlights include: "40 Miles To Vegas", "Love Seeker", "49 Mercury Hell","Miss Anna"and  the catchy but kinda chessy   "Hipster"(two versions of the song appear here).
.
The Scotty Bullock Trio are a pretty stout  outfit that aren't afraid to mix it up and do it well.With  "Love Seeker" they have diffidently backed up the buzz about them.Recommended!!
https://www.facebook.com/scottybullocktrio/   http://scottybullocktrio.de/