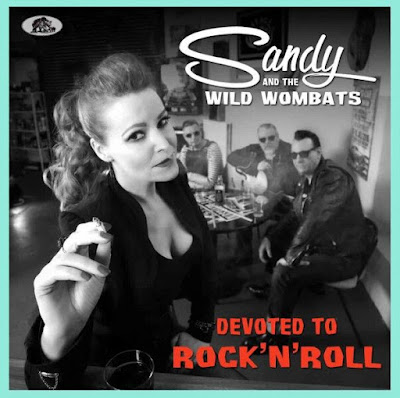 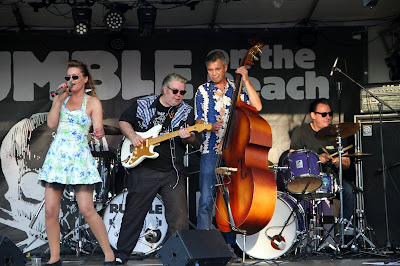 Back in 2015 Sandy and The Wild Wombats firmly establish themselves with the release of their debut album "The Girl Can't Help It". Sure it was all covers but it was loaded with some freakin' sweet interpretations.It also helps that this is a stout outfit that knows how to deliver.This is rockabilly that has been described as dirty, wild, has an edge and is fronted by some smokin' hot vocals.Now the band's follow up album " Devoted To Rock'n'Roll"  is here and man have they upped the anti.This puppy comes snarling in with 12 originals that with the exception of 1 ballad, really rock out . It's 50's rockabilly/ rock n roll that pushes into neo-rockabilly with shades of blues and country thrown' in too boot.There is also a hidden track that's a honky tonk number.Highlights include : "I Gotta Move", "Cure Your Ill", "Rockabilly  Man, and "Hey Hey Hey".
Overall "Devoted To Rock 'n' Roll" is one impressive disc that is top shelf. It's fun, aggressive and packs a punch. If Sandy & The Wild Wombats weren't on your radar before they should be now .This is a damn good album by a band  that's on a mission. Highly Recommended!
https://www.facebook.com/sandyandthewildwombats/