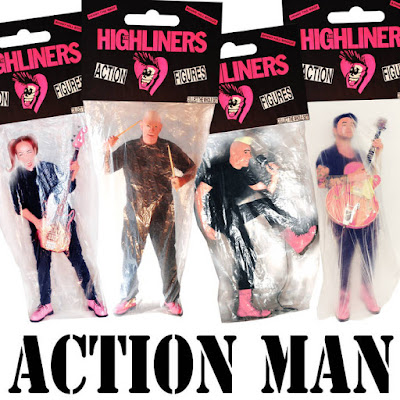 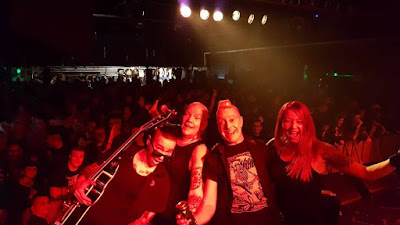 The Highliners have been at it off and on now for almost 33 years .In that time they achieved some major success and have developed a loyal and constantly growing fan base. With a few  line up changes and other hiccups they have always been a pretty good rock n roll/psychobilly band  .Hell just look at the current line up ,it's stacked with some serious pedigree : original member Luke Morgan, long time member Ginger Meadham  and new comers Andy Kandil and Lilit Clockwork .The Highliners have always been  stacked  but the key to band's success is that they are and remain a fun band at heart with a great sense of humor .The term "funobilly"probably started with them.Their latest release "Action Man " bares that out in spades.This puppy is a blast of fresh air that clocks in at under 25 minutes of kool action.As usual it's a great mix of rock n roll, psychobilly, and punk.We get 10 tracks here, some of which are on the band's 2014 live recording "The Diablo Sessions" and 2013's "Gravedigger Stomp" ep( both on Diablo Records). Highlights include: "Baby Is A Psycho", "Minicab Minicab","Frank The Quiff" and "Cheapsuit Boogie"

Overall " Action Man " this is just what one would expect from The Highliners and that's a good thing.This is a  pretty sweet  refreshingly fun ride that packs punch.Your gonna want to grab this puppy.Highly recommended !!
https://www.facebook.com/The-Highliners-147669562004658/   http://www.thehighliners.co.uk/
https://diablorecordsuk.bandcamp.com/album/the-highliners-action-man-pre-order
Posted by Slams Reviews 2 at 11:12