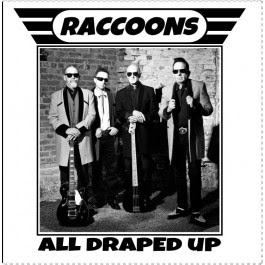 Tasmania is not a place one would associate with teddyboy rock n roll.However it's the home of the Raccoons  a long standing and underrated teddyboy inspired rockabilly band.These cats have been  kickin' around  down under for more than a few years now. They  managed  too catch the ear of Raucous Records with their "tough wiry sound" and in  2014 they released the ep "Slowburn". In late 2016 the band unleashed their debut album "All Draped Up". Slowly but surely it has gained traction and rightfully so.This puppy nails it  and comes in with 12 originals of teddyboy/rockabilly action that push the fold.From mid tempo burners to all out rockers  this is one confident and kool  ride.Highlights include: "Sirens And Chrome", "Backhander", "Snarlin' Darlings" and "On Your Bike"
What's really kool about " All Draped Up " is that it's more than a straight teddyboy /rockabilly album and as a result it is a hard driving and refreshing jolt. It's all good and you should give this a spin. Recommended!!!
https://www.facebook.com/raccoonstas/    https://www.theraccoons.website/