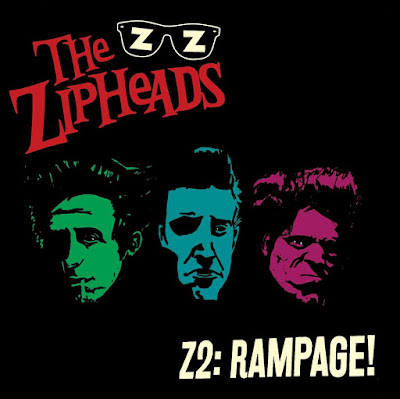 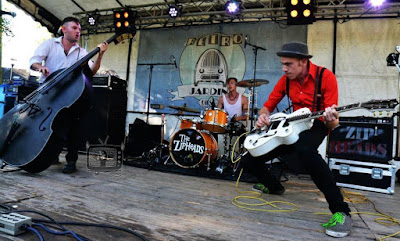 For many people out there The Zipheads are heavily associated with the psychobilly scene.One problem with that is these cats are really a straight up killer rock n roll band.From their stout debut album "Prehistoric Beat"(2013) to the  single "Just Don't Seem To Care" (2015) and their cover of "Earwigs In My Brain" (2016) prove that.If that wasn't enough their latest release "Z2: Rampage!" shows in spades that this is one serious rock n roll outfit.This puppy comes in with 15 tracks that gives you a big bang for your buck.It opens and crashes in with smash mouth surf then rocks hard, lets you catch your breath, then rocks out only to end with a classic soul/r&b number.It's a hell of a ride that's hard hitting, refreshing and diverse.As usual we get a kool  mix  rock, billy,punk,a little ska and even some r&b.There is also some damn solid harp action here to boot.   Highlights include: "Surfquake", "Instead", "Last Man On Earth", " Rampage" and a smokin' cover of "Get Ready".

The Zipheads are flexing their musical muscles with  "Z2: Rampage!". As a result this is one excellent rock n roll album and one you should snag up.Highly recommended !!
https://www.facebook.com/zipheads/     http://zzz.zipheads.com/
Posted by Slams Reviews 2 at 11:55