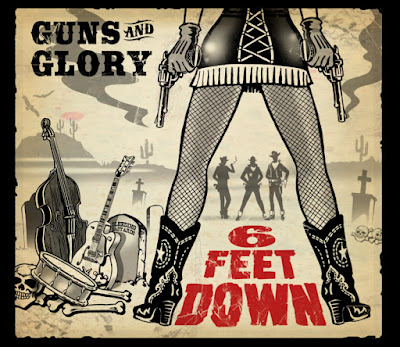 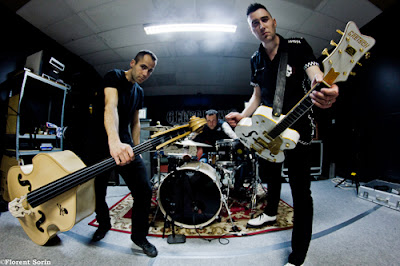 The other day I was pleasantly surprised to see that french psychos 6 Feet Down were not only back but they also had a new album dropping.In early 2013 the band  released  their 2nd album,the pretty stout "Strange" and managed to get a whack of attention.By early 2014 the band seem to disappear off the radar screen for many.The reason for this was a change in the drummer seat and then the band went about resetting itself . Well the results are now in with "Guns & Glory" an album that packs a big wallop.With 10 tracks of "explosive psychobilly" that mean business. This is hard ,melodic and  modern psychobilly that rocks out pretty damn good.In the past these cats have mixed hard rock and psychobilly successfully  together and again do so here.There is an underlining  boldness and a kool vibe  here that helps drive this puppy on.  Highlights include: "Victim Of Unreality"," Wake Up", " Never Dead" and "Bleeding Bastards"

Overall  "Guns & Glory" is well produced,fast paced and sounds great.The album art work is done by Vince Ray and that's always a plus to boot.This is easily 6 Feet Down's best album yet and that should tell you how good it is.Recommended!
http://6feetdown.com/      http://6feetdown.bandcamp.com/album/guns-glory   https://www.reverbnation.com/6feetdown
Posted by Slams Reviews 2 at 13:08