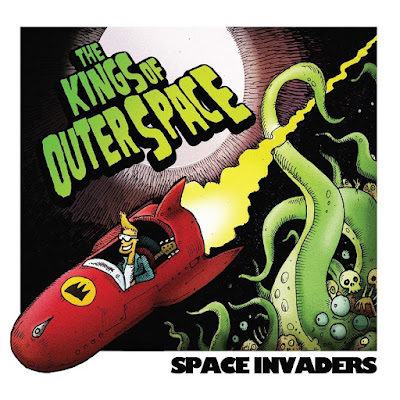 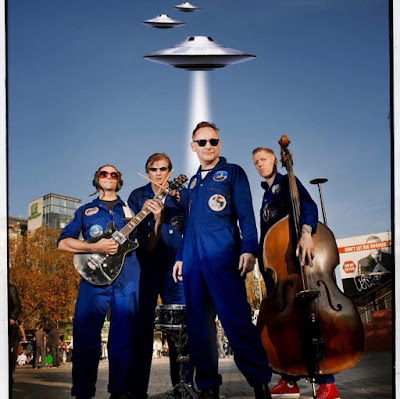 The Kings of Outer Space have officially re-landed  and as in the past they have brought with them a pretty damn kool bag of goodies.It's been 3 years  since they released their last effort, the stellar "How To Fly A Rocket", a slice of modern rockabilly/rocknroll that was just straight out kool.With the release of "Space Invaders" The The Kings of Outer Space are back and better than ever.Coming in with 12 tracks (including 2 covers and 2 live tracks) that are sure fired winners.We get the usual "Cosmic Psycho Rockabilly" with a splash of ska and garage.Right from the start this puppy is strong and doesn't let up.You have to be impressed with the freshness and diversity of the album.Highlights include: "Girl On The Moon" ,"Space Invaders" ,"Remainder Men", "Zombie Walk" and "Cosmic Boy"

The Kings of Outer Space may be a "modern rockabilly" band but they are also more than that.This is a band that's not afraid to stray off course and that makes them a stronger outfit.These kats are damn good and "Space Invaders"bares that out. This puppy pays out big and is one of the years best! Highly recommended !!!
https://www.facebook.com/thekingsofouterspace/    http://www.thekingsofouterspace.co.uk/
Posted by Slams Reviews 2 at 08:15