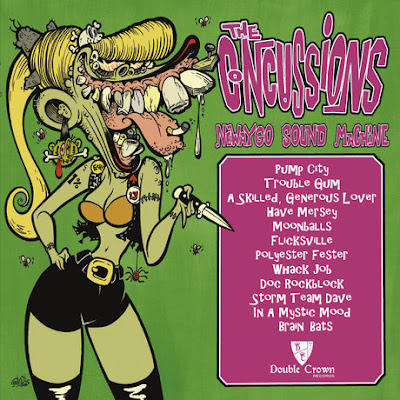 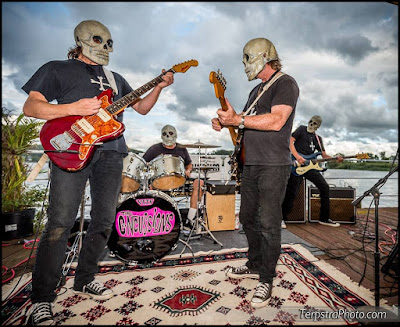 Hailing from Grand Rapids, the instro/surf band The Concussions  have been at it  since 2003 and along the way they have released 4 pretty damn good records to boot.Their brand of surf inspired instrumental rock is contagious and as a result they have developed a strong and growing fan base It's been to 2 years since their last effort, the stout "Break Up With The Concussions " was released .Now they are back with the kool " Newaygo Sound Machine" and this puppy steps it up.Coming in with 12 tracks that hit the ground running,this is a sure fired winner.Ranging from  raw and hard edge instrumentals to poppy surf.Throw in some spaghetti and garage and the result is a mix bag of goody's that leaves you wanting more.Highlights include:  "Whack Job" , "Flicksville" , "Pump City" and "Storm Team Dave".
The Concussions have put together their best album yet with" Newaygo Sound Machine". At times there is a familiar ring here but with the mix of styles, strong writing and execution this puppy comes off fresh and exciting. Recommended !!!
https://www.facebook.com/theconcussions/    http://www.theconcussions.com/   http://www.doublecrownrecords.com/the-concussions-newaygo-sound-machine-cd/
Posted by Slams Reviews 2 at 11:34