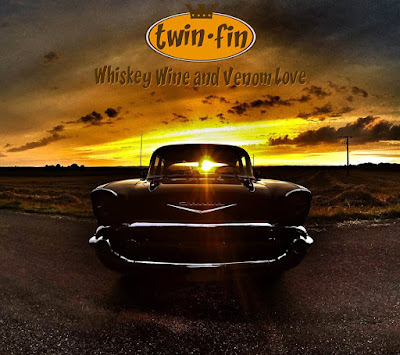 These days it's gotta be a tough row for swingabilly bands.There aren't many doing it and the venues for them to play at  are far and few.In the barren waste lands  of South Western Ontario hail the outfit known as  Twin . Fin. Over the past few years they have changed members,their name and have evolved from a straight up rockabilly band to a pretty kool swingabilly band. During that time they developed a  following, gained some  strong radio airplay and released a strong single "Rocco Perri". That song has gotten the band some major attention. The next step for these kats was to put out an album.Instead of rushing out something they would regret the band  took the time and effort to do it right as they say.The result is "Whiskey Wine & Venom Love" a strong,smooth and damn good debut.We get  10 originals  of swingabilly that have the right mix of blues ,jazz and rockabilly. The songs range from sultry slow burners  to all out out boppers and as a result the album has a kool vibe and a good flow.Highlights include: "Devil Girl Stomp", "City Of City",  "Whiskey Wine & Venom Love" and " Won't Let You Go"
This is a strong debut by a band that has good songs  and can execute them very well.If your into swingabilly this puppy is for you and even if your not " Whiskey Wine & Venom Love" is worth checking out. Recommended.    https://www.facebook.com/TwinFin-494503570709347/timeline     check out a couple tunes here  http://allstage.ca/project/twin-fin-whisky-wine-and-venom-love/
Posted by Slams Reviews 2 at 12:37