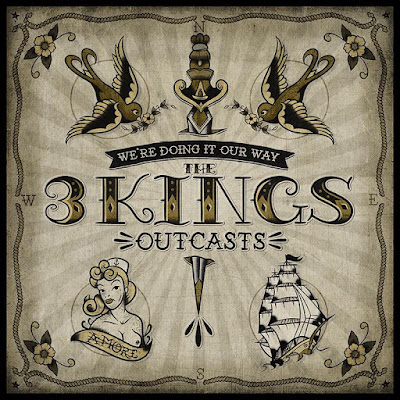 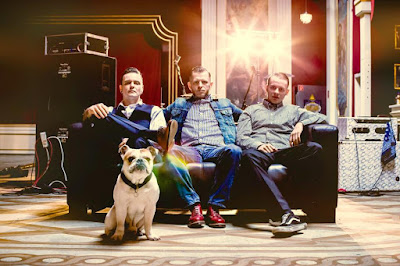 The first I heard mention of Germany's The 3 Kings was that they were a killer hard rock band ,the next time the name came up they were rockabilly and then I heard they were punk.Not knowing what to think I went and checked them out. Surprise surprise these kats are a straight-up rock n roll band that happens to throw  rockabilly, country and  punk into the mix.The band basically came together in 2008 and released a 6 song ep called "Vol.1" in 2011. Now in 2015 their  full length debut album," Outcasts" is out and it's one kool and diverse effort.This puppy struts in with 14 confident tracks that hit the mark.We get a mix that ranges from rock n roll to  punkabilly to rockabilly and country.The diversity of the tracks makes this a very  refreshing   effort .Hell these kats seem to switch gears here with a natural ease and you gotta like that.Highlights include " Street Girls & Drunken Sailors" ,"License to Kill", "Bruiser" and "Never Come Back"
Bottom line on "Outcasts" is that The 3 Kings have put together a very strong rock n roll album  that is not afraid to stray out of the fold .Hell it even backs up it's bark. Recommended!  https://www.facebook.com/the3kings/timeline   http://www.the-3-kings.com/
Posted by Slams Reviews 2 at 12:40